Before seeing what it’s really capable of, we’re going to look at the features of the NewAir WCD-200W Hot and Cold Water Cooler. For starters, it is energy-star qualified. It produces hot water that ranges in temperature from 176 degree F to 203 degrees F.

The cold water temperature range is 43 degrees F to 50 degrees F. This water cooler is also small and compact, but the price isn’t. It has small nozzles, which ensure the nozzles will fit into virtually any bottle you throw at it.

This water dispenser is quite versatile; it can be used with two, three and five-gallon bottles. It’s extremely quiet and doesn’t leave you drinking water that tastes like plastic.

How It REALLY Performs

Now that we’ve highlighted the features, let’s see how this product really performs. According to reviewers, this water dispenser doesn’t flavor the water that comes out of it.

This is a major benefit when you consider that 99 percent of the other products out there leave some sort of flavoring in the water, whether it’s a metallic or plastic taste. Other units produce a flavor when they cool, heat or dispense the water.

This model might also come with a rubbery smelling power cord, which seems to take several days to go away. Getting this product setup is very easy. People say it’s a good idea to let the product sit upright for at least two hours before you start using it because it has a refrigeration device.

After it is setup, you can add a two, three or five-gallon water bottle. Although the picture shows a dispenser that comes with a bottle, this product DOES NOT come with a bottle of water, so you’ll need to purchase and install one.

It’s quite easy to find most sizes of water bottles in the local grocery store. What is really neat about this unit is that it’s very easy to clean. The cleaning process is very straightforward, so you won’t find yourself spending hours on it.

This model is also great for making tea because it produces very hot water. However, some reviewers have had issues fitting a large pitcher under the fill nozzles because there isn’t much room for a large pitcher. According to most reviewers, this product produces the hottest and coldest water.

The water is even hot enough to make some delicious coffee. Unfortunately, this dispenser doesn’t have an anti-splash feature like some other models do. Some people have had issues with the spout being too low. The storage capacity for the water, however, isn’t the largest.

Most reviewers who’ve purchased and used this water cooler say it’s amazing because it doesn’t produce water that has an ‘off’ taste, like many other water dispensers are known to do. Overall, most reviewers love this product and have experienced very few problems. 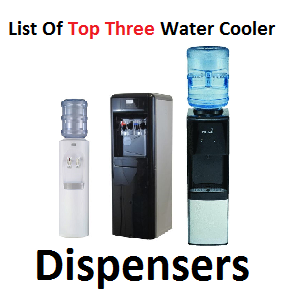